I continued working on the XBee api frame (or packet, whatever you want to call it) analyzer and decided I should probably move on to something more suited for a computer program. I chose Java as I’ve had some classes on it in Uni, however the layout manager is still something I dislike as it took me quite a while to get a decent layout working (and it’s still a bit weird). I’m using the RXTX library to communicate with the COM port (Arduino does the same). 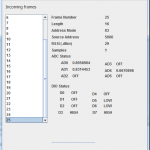 Here’s a screenshot of version 0.1 which can show you all incoming frames concerning sampling. I’ve used Java so I could make it crossplatform, however I’ll probably switch over to C# as building a decent GUI is easier as well as it has native support for COM ports and unsigned byte which Java does not (luckily a “signdByte & 0xFF” does the trick).

And lastly a short video of the program in action:

Once the program has some more functionality I’ll make it public. In case you would like to take a peek at the source code let me know.